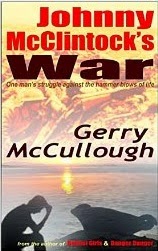 As the outbreak of the First World War looms closer, John Henry McClintock, a Northern Irish Protestant by upbringing, meets Rose Flanagan, a Catholic, at a gospel tent mission – and falls in love with her.

When Johnny enlists and sets off to fight in the War he finds himself surrounded by death and tragedy, which pushes his trust in God to the limit.

After more than five years absence he returns home to a bitter, war torn
, where both he and Rose are seen as traitors to their own sides.

John Henry and Rose overcome all opposition and, finally, marry. But a few years later comes the hardest blow of all. Can John Henry still hang on to his faith in God?

From the bestselling author of Belfast Girls, Johnny McClintock’s War will be offer at a low introductory price for a very limited time. Pick up your copy today.