Hooked On You by @Lindsey_Brookes #FREE for #Kindle 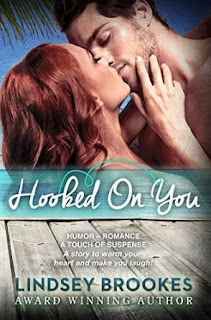 When Shay McDaniels learns that her father has been receiving threatening letters she heads down to his resort in the Keys. Frustratingly, he refuses to call the police, determined to handle matters on his own.

Private investigator Chase Reynolds has no idea the woman he meets on the beach, the one whose son is determined to ‘catch his mommy a man’, is James Lansing’s daughter. James had assured him that his daughter was safely away in . So when he sees the woman he’d met on the beach talking to James, even hugging him, Chase regretfully moves her to the top of his suspect list.

It’s not until James invites them both to join him in his private dining room that they discover each other’s true identities. convinces Chase to become his daughter’s personal bodyguard until the situation with the threats is taken care of. Being thrown together twenty-four seven is the last thing Chase wants, considering the unexpected feelings he has for Shay. Distraction can make a man careless. But he accepts, determined to protect her and her son with his life.

For the first time since her divorce, a man stirs Shay’s passion. More importantly, he makes her son smile. The last thing she expects is to fall for her ‘bodyguard’, a man determined to keep his heart at bay, but she does just that. Can she convince Chase he really is her happily-ever-after? Or will secrets uncovered ruin any chance of a future together?

Humor…Romance…A touch of suspense…A story to warm your heart and make you laugh!

“…a really good story. It had a lot of humor and romance. You will not be disappointed!”