Roaring For Him by @CeliaKyle ~ HOT Paranormal Romance 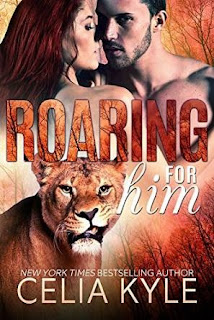 Can cats and dogs get along? Maybe. What about werelions and werewolves? If it’s Tilly and Mitchell, definitely. Or rather, maybe. If he’d just get his head out of his…

Half-werelion Tilly McBride owns Bless Your Tart, the South’s latest and greatest bakery. Or at least the best one in . Fine. It’s the best in Wilder, Georgia, mainly because it’s the only one. She manages to balance running the shop, keeping her middle sister in college, and making sure she doesn’t kill her youngest sister before she graduates high school.

She’s a proprietor, an older sister and… a mate? At least that’s what local werewolf alpha Mitchell Blake seems to think. He also assumes she’ll hop on the Bang Town Express the second they meet. Sure, he’s hot. Hotter than hot with his muscles and that smile and the way he growls… Should. Be. Illegal. But is he better than a chocolate cupcake with buttercream icing? That is the question. She’s afraid the answer might be yes.

Werewolf Mitchell Blake thinks the answer to every question should be yes. Yes, he wants Tilly. Yes, he craves Tilly. Yes, he’d like to bend Tilly over the pack’s claiming altar and mate her so everyone will know she’s his. She. Belongs. To. Him. He just has to convince her first. That shouldn’t be a problem. He’s the Wilder alpha. Every woman wants to be with him. Except one curvy, annoying, delicious package named Tilly McBride.

Mitchell will have her. Just as soon as he gets rid of the one trying to end their mating before it has a chance to start. Permanently.

Find Roaring For Him: