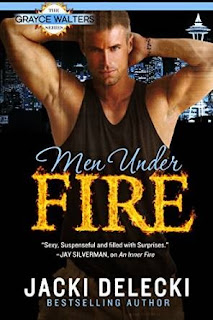 Hollie Thomas, the feisty, tattooed office assistant to Grayce Walters, has come a long way from living on the streets. Along with finding a job she loves, she’s found friends and safety. When her new life unravels, she faces dangers that dwarf her troubled past. Fighting to survive, she discovers that sometimes what you need the most might be found in the one person you failed to see coming.

Returning home from the war and struggling to find his way, Sergeant Nick Welby, and his bomb-sniffing golden lab, use their skill set in the last place he’d ever imagined—’s Waterfront. To protect the one woman who matters, Nick and his trusty canine partner will risk everything to rescue her and Seattle from disaster.

Embroiled in Grayce Walters’ most perilous case—a terrorist plot with the threat of deadly explosives—can Nick and Hollie work together to save themselves and each other before it’s too late?

“Fun, adventurous novel that gives you romance as well as suspense and surprise.”

“I really enjoyed this book! The story line progressed at a good pace, and the characters were well developed. This book can be read as a stand alone, but I would recommend reading the previous books in the series”