Saved by the Alien Lord by @MinaCarter ~ Science Fiction Fantasy $0.99

Warriors of the Lathar, Book 2 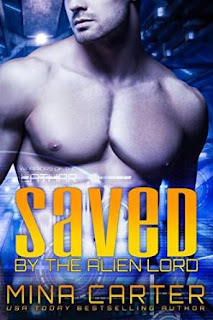 Earth girls might be popular...but they're definitely not easy.

Kidnapped by sexy aliens, Cat and the women of the Sentinel Five base are looking for a way home. Their captors might be ripped, hot warriors looking for that one special woman, but these girls have this little thing against being slaves. Even if their leader is well on his way to stealing Cat's heart as well as her body...

Then a new player enters the arena. A dangerous rival war-commander has challenged the K'Vass claim on Terran held space and all it's women. Tarrick K'Vass can't afford to let any of the earth women be captured, especially not his little human, Cat.

When his human is taken, he'll do anything to rescue her... Anything. Up to and including starting an intergalactic war.

"I love this series and can't wait for the next book."


Other books in the Warriors of the Lathar Series:
Captured by the Alien Lord, Book1