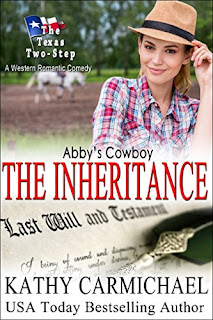 Billionaire Harold Hopewell traveled the world, encountering people and letting their stories touch him. In death, he is giving back, leaving an unusual will filled with life-altering bequests to the people he met along the way. Read the Inheritance Series, and let their stories touch you.

Rancher Josh Callahan is astonished when he learns he has inherited the two Corgis he once returned to their owner Harold Hopewell, as well as a truckload of cash—and an interior designer. Designer Abby Palmer is excited about making over Josh's beautiful old farmhouse, whether the stubborn cowboy likes it or not. Between the dogs, the debris and the designer, Josh is in over his head—and his heart.

All of the stories in the Texas Two-Step romantic comedy series are sweet, charming and emotional contemporary romance. Each story stands alone, but all Texas Two-Step novels and novellas feature love stories about members of the Nelson, Murphy or Palmer families — and sometimes, more than one!

“a happy and very light story for a mental relax and unwind.”

Learn more about The Inheritance Series