Hold Me by @BreaViragh #Kindle #Nook @iBooks and More! 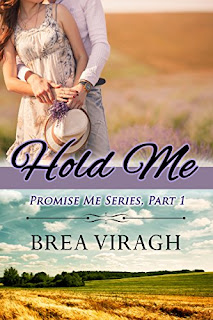 Isabel Cook has a hard time accepting her homecoming. Moving from back to her hometown of Heartwood, has her pride squealing in pain. Accompanied by her fiancé, , she makes the transition just in time for her fifteen-year reunion. There she encounters and reconnects with her old childhood friend, August McKenney. The reunion is bittersweet, as August reminds her of her past and all the things Isabel tried to leave behind. Now in her mid-thirties, she is transported back to the town of her youth, forced to live in a hotel until the renovations on her house are completed, and hating her job.

August is there to lend his support either way. They made a promise to each other the year they turned thirteen. If neither one of them is married by thirty-five, then they would give themselves to each other in holy matrimony. Isabel had thought herself safe, never realizing that, even after all this time, August still loves her. And has made it his mission to do everything possible to claim her.

Email ThisBlogThis!Share to TwitterShare to FacebookShare to Pinterest
Labels: Brea Viragh, Hold Me, Promise Me Series