Wedding of the Century, Bk 1 by @PatriciaMcLinn #Kindle #Nook and More!

A Scandalous Wedding, a Second Chance 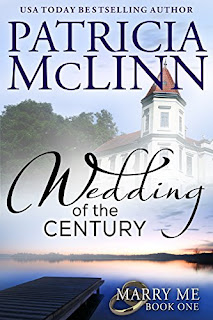 Annette Trevetti, poor and unpolished, was a modern-day Cinderella about to marry her Prince Charming. Until a very pregnant woman strutted into the church—staking a claim to Annette’s fiancé.

The wedding was off and Annette was gone, the awful consequences of a family secret Steve Corbett had hoped would never rear its head. But now a single father, he can’t wish it never happened, because it brought him the daughter he adores.

When a family incident finally draws Annette back to small-town Tobias, Wisconsin, after seven years, she and Steve must face each other, their mistakes, their yearning for a long ago love, and the reality that they can never go back to the innocent days before a wedding that went so wrong.

Drawn together by shared concern for a beloved elderly friend, they must step out of the past’s shadow to save her and her home… But that shadow could blight their love a second time.

Can a little girl and an old woman help them absolve old sins and build a future?

“McLinn shines in this story of a love that was meant to be.” ~5-star Amazon Kindle reviewer

Other titles in the Marry Me Series:
The Unexpected Wedding, Book 2
A Most Unlikely Wedding, Book 3
Baby Blues and Wedding Bells, Book 4

Save by buying the entire series in one anthology!
The Marry Me 4-Book Series

Email ThisBlogThis!Share to TwitterShare to FacebookShare to Pinterest
Labels: @PatriciaMcLinn, Patricia McLinn, The Marry Me Series, Wedding of the Century