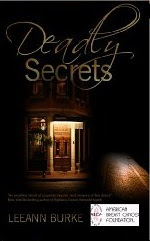 PHILIPPE LAFRANCE is a well known reclusive writer whose life is suddenly thrown upside down. The grandfather he never knew existed dies. Throughout his own investigation, Philippe learns that his family has kept secrets from him, deep, ugly secrets. A killer is murdering the men in his family. First his father then his grandfather have succumbed at the hands of another. This murderer is trying his utmost to keep secrets buried.

Bereft, Roxanne St-Clair is left to manage a restaurant when the only person who ever mattered to her, her foster parent and mentor, is murdered. She puts her life on hold to find his killer and bring him to justice.

Thrown together by circumstance and a mutual goal, Philippe and Roxanne fight their attraction and team up to find the killer, bring him to justice and unearth the truth. To stay alive, they must keep one step ahead of the assassin in order to prevent him from killing his next target, Philippe. Will they succeed in bringing to justice this killer before Philippe becomes his next victim? Will they be able to deal with the truth behind all the secrets?

* * * DEADLY SECRETS is an official sponsor for the American Breast Cancer Foundation (ABCF). Proceeds from the sale of this title go to the ABCF. Ms Burke is also donating 100% of her royalties to Breast Cancer research.* * *

"Burke pens a first-class novel that will keep readers on the edge of their seats until the end with its many plot twists. Not only is the mystery aspect of this story well-written, the romance is equally interesting. If all this isn't enough to make you want to buy this read, Burke and the publisher are donating proceeds to the American Breast Cancer Foundation. Brava!" ~ Romantic Times

"This is a well written, well paced romantic story that will keep you turning page after page until there are no more to turn. I read it in one day."