LARP The Battle for Verona by Justin Calderone 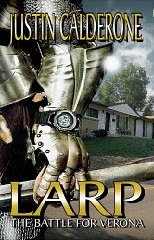 Sometimes even a geek can become a hero.

Dennis and his friends have been LARPing (Live Action Role Playing) since high school. Now, in his 20s, Dennis is seriously considering giving up LARPing for good. He’s tired of dealing with his overzealous friend Mark; he’s tired of his older brother Brad’s constant put-downs; and he’s tired of the fact that he doesn’t have a girlfriend. Check that. Not a girlfriend, but the girlfriend. Alyssa—the one woman he’s been pining over for years.

Dennis and his fellow LARPers have never been considered cool, in their small island community of Verona, located off the coast of Washington State.

But all of that is about to change . . .
While Dennis and his friends are attending a big LARP tournament on the mainland, a rogue terrorist group of Mongolians in medieval garb, led by an American madman, invade Verona and take its citizens hostage—including their families and friends.

When the LARPers find out what’s happening in their home-town, they do what any dedicated LARPer would do: they put on their armor, strap on their swords, and fight their way home—LARP-style!

"Justin Calderone's LARP: The Battle for Verona is a witty, action-packed adventure that will leave you breathless. Sharp-edged, and lots of fun!" -- Jonathan Maberry, New York Times bestselling author of Assassin's Code and Dust & Decay.

Justin Calderone is 35 years old, and has been writing stories as long as he’s been able to hold a pencil. Justin began to work actively on his writing in 1995 after reading Jack Kerouac’s novel, Desolation Angels. The freedom and spirituality of Kerouac’s prose struck a deep chord with Justin, and he has been defining and finding himself through his own writing ever since. Justin’s first book, the poetry novel Revolutions, was released in 2004, and is available at bookstores everywhere, and online.