Ghost of a Chance by S. J. MacIver 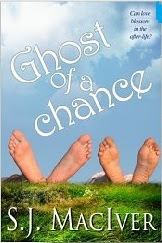 Josh Hankins and Tori Olson were two of the most envied and sought after people in Hollywood. He, an up and coming star of motion pictures; she, his personal and business manager. Life was good--until the automobile accident.

When they awake to find they are no longer alive, they are shocked but also confused by the fact that they are still wandering among the living. That shock and confusion multiplies when they discover they have a 'keeper' of sorts, a ghostly woman named Belle who calls herself a guide. At first Josh and Tori are less than eager to follow their guide's demands, but they quickly learn that ignoring Belle leads to sometimes horrific, if occasionally hilarious, punishment.

Why is God doing this to them? Tori wonders. As a faithful, church-going sort, she has always considered herself a disciple of Jesus Christ and has led what she thinks of as a Christian life. While Josh has never showed outward signs of his faith, something inside him has always lifted him through good times and bad. As they search for the truth and eternal peace, the two are confronted with another surprising fact--they love each other and probably have for a long, long time. Is it too late for that love to blossom and grow, even here in the netherworld? Or did they miss out on their only chance at true happiness?

S. J. MacIver, in an unusual twist of order, is a native Californian now living in North Dakota. Between reading and writing, the author enjoys visits to a nearby local wildlife refuge, traveling both near and far, and a married life that has spanned a lifetime.

What reviewers are saying about books by S. J. Maciver:

"...grips the reader from beginning to end!"

"This book adeptly blended all of my favorite ingredients (romance, mystery, spirituality). It was a lot of fun."