The Memory of You by Laurie Kellogg FREE 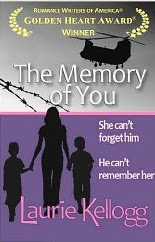 She can't forget him

He can't remember her

Together, they must discover the healing power of unforgettable love