Two of Them by Elodie Parkes

A Quirky Tale of Mystery and Romance 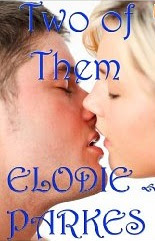 Two brothers alike in a crucial way—different in all others—both looking for love. Named after characters in one of their grandfather’s gritty spy novels, Jet and Falcon wonder if their often absent father is a spy. Kind-hearted Jet feels trapped in a job he hates. Dynamic, creative Falcon loves his work.

Jet longs for something different in his life. When he meets Emma, he thinks that after their night of delightful lovemaking he has found it. He longs to see her after that night. Does she feel the same?

Jet begins to change his life, but it’s worrying and time consuming. His luck is about to change when Annabel kisses him in the local pub garden. Her sexual advances at first shock Jet until he lets himself relax into her passionate ways.

Jet has inherited a cottage from his grandfather, and as he clears out the garden shed what he finds there turns his ideas about his own family upside down.
Jet along with his brother Falcon decide to find out the secrets that have been hidden from them. Was their father a spy after all?

As Jet and Falcon start to unravel the secret life of their father, they realize that love is more important to them than they could have imagined, and Falcon finds what he wants.

"...surprising twists amidst the conflict, passion and secrets. How can you go wrong with a sexy and suspenseful story from this talented author? Highly recommended."