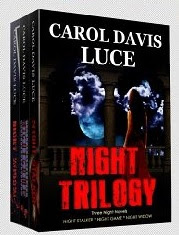 For the first time in one volume, three of the 'night' novels by Night Writer, Carol Davis Luce. The 'night' books are standalone thrillers that go bump in the night.

Over 48 Five-Star Reviews. This volume contains two Amazon bestselling novels, and the newest release. The three books are valued separately at $11.97

NIGHT STALKER:
Things were looking up for Alexandra Carlson. With her divorce behind her and the mysterious death of her father fading in her memory, she was moving on. Then things began to happen. Anonymous phone calls full of heavy breathing. A broken tree branch outside her bedroom window. Her cat gone without a trace. A moving shadow above the skylight. Surely it was all her imagination...

Then one day she picked up the phone. In the background she could hear a scratchy record--an old song that brought dark memories out of the shadows. That night something woke Alexandra out of a sound sleep. This time, the heavy breathing wasn't coming from the telephone. Someone was in house with her. And she was at his mercy.

The exclusive King's Club resort casino is a glittering playground for gamblers with everything to gain...and the hunting ground for a shadowy killer with nothing to lose. So far, the odds are in his favor. Until casino owner Jay King places his bets on a beautiful private investigator. . .

Kasey Atwood is an expert at undercover surveillance, and no stranger to this dazzling world of high stakes and low morals. Her attraction to the sensual, enigmatic King is immediate--and incendiary. As their love affair heats up, she becomes a pawn in a dangerously seductive game of passion and revenge. Then more innocent blood is shed, and Kasey knows she can't afford to make one false move. At risk is nothing less than her heart--and her life. . .

"NIGHT WIDOW has all the ingredients of a first-class thriller: a reclusive former movie star, a strong and capable heroine, and a story that twists and turns like Mulholland Drive. Nothing is as it seems in this present day story of Old Hollywood, obsession, and murder. As Luce delves deeper into the life of fading film star Sybil Squire, the stakes escalate to a stunning climax." ~J. Carson Black, author of DARKNESS ON THE EDGE OF TOWN