No Easy Way Out by Elaine Raco Chase

Romantic Times called No Easy Way Out - "A delicious tale of the unexpected." 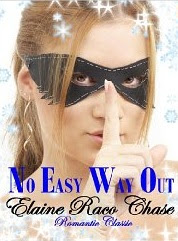 No Easy Way Out was #100 in the Dell Ecstasy Romance line published in 1982. It was timed to debut two months after Disney's EPCOT Center opened in Orlando. Why? Because, like my real-life husband, heroine Dr. Virginia Farrell was working on the Audio-Animatronic™ robots robots for the park.

Engineering robots, and all non-living creatures, was easy for Virginia – not so much with people. So when her best friend dragged her to the company Halloween party, Virginia went kicking and screaming…well as much as her Playboy bunny costume allowed for any movement.

But with her mask in place and her normal reserve as tiny as her costume, Dr. Farrell suddenly let loose. Wild and wanton, she fell into the muscular arms of the costumed and masked Bandit. His virile charms and passionate kisses penetrated her reserve. But at the stroke of midnight, when the masks were to come off, Virginia fled, leaving her bunny tail in the palm of the handsome Bandit's hand.

But was it the prim, professional Virginia? She resembled oatmeal!