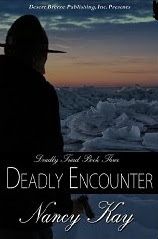 Lanie Delacor insists a man followed her from a roadside rest and tried to kill her. Unconvinced, PA State Trooper TJ McGraw has his hands full dealing with the sassy, green-eyed lady, but when two dead bodies turn up at that very same rest stop, TJ suspects Lanie unknowingly witnessed a double murder. As the case unfolds, sizzle between the determined trooper and the strong-willed lady escalates. He discovers she means more to him than a job assignment, yet Lanie is convinced she has nothing to offer TJ once the heat burns off -- until a surprise message from the grave softens her heart and dictates whether they have a future together.


What readers are saying about the Deadly Triad series:

"A fast-paced adventure not to be missed!"

"...a fascinating plot of murder, revenge, and romance. A page-turner!"

"It is seldom that you find each character in a book so well developed."

"The story does not follow a well worn path but cuts it's own,making it a class act. This is just plain great writing that never lets you down and the ending...well...it was gut wrenching."