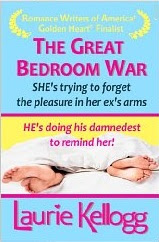 Book 2 of The Return to Redemption Series

Fledgling entrepreneur Samantha Riverà is in charge of her own life for the first time and determined to keep it that way. She's attempting to banish her call-all-the-shots ex-husband from her dreams, but it's kind of tough forgetting the Zorro look-alike who's willing to do anything for her, except give her the only two things she wants--another baby and his love. When their 14-year-old daughter Dani--who's maintaining a shaky remission from leukemia--rebels, Sam foolishly seeks advice from her Don Juan ex, who, incidentally, could charm the knickers off a nun.

When Nicolàs Riverà returns to Redemption, PA, to help control his defiant daughter, he discovers he not only has serious competition for Sam's affection, but Dani has a crush on a boy who is the last kid Nick wants her interested in. The boy is a horn-dog rebel who reminds Nick way to much of his teen-aged self.

Sam never understood that, to a second-generation Latino man, familial responsibility is número uno. She also has no concept of how terrified this reformed bad-boy and businessman is of losing her to another high-risk pregnancy. The death of their premature son devastated Nick, and his refusal to sire another child incited The Great Bedroom War that ultimately destroyed his marriage. Now, he'll stop at nothing to get his family back--even if it means blackmailing his way back into his ex-wife's home to become a greater presence in his sick child's life--and, with any luck, Samantha's bed and heart.

"I was THRILLED to see another book by Laurie Kellogg! And equally thrilled to enjoy the read once again."

"Funny, sassy, and poignant in ways sure to touch you, augmented by the appearance of old friends from previous books, Laurie Kellogg has another winner."

Find this book in:


The US Kindle Store