Maybe This Life by J.P. Grider 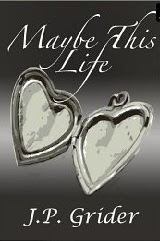 Lena Giordano has just met Rick Murphy. So why does she have the glaring suspicion that she's met him before?

How would you feel if a man you just met triggered visions of a haunted life that was not your own, but those memories inflicted pain and fear as real as if you had lived through them?

And, what if those visions were a warning of a similar fate?

Would you have the courage to change your own future by arranging those warnings, like pieces of a puzzle, to form a new destiny?

For Lena Giordano, finding that courage isn't going to be easy. Abused relentlessly by her fiance, twenty-five year old Lena is putting herself in danger by not breaking her engagement, and her visions of her great-great grandmother, Angelina, are confirming this risk. Then, thirty-eight year old Rick Murphy appears, claiming he has been in love with Lena for nearly one-hundred years. Rick's presence triggers nightmares even more intense than before, forcing Lena to put the pieces of her visions together to learn her destiny. Though for Lena, even after her paranormal puzzle is complete, the bravery she needs to open her heart is even more tormenting than the abuse she endures.

Take the journey with Lena through her surreal fantasy land and find out if her own self-worth is strong enough to deserve a man who would cross lifetimes to be with her.

Maybe This Life, a romantic suspense, is a story about past lives and second chances; a reincarnation, past-life, time-travel, love story - A romance of two souls who couldn't stop at one lifetime to be together.

"This is destined to be a classic love story."

"JP Grider draws you in with the story of a long lost love. Her vibrant characters and strong story telling skills will draw you in. I didn't want to put the book down. I did not want it to end!"

"I'm not quite sure whether or not I believe in reincarnation but it didn't matter I love the notion that love conquers all. JP Grider wove a beautiful story of unconditional eternal love. Lena has recurring nightmares. She is afraid of her fiance. I enjoyed watching her grow in strength and determination. Of course I was ecstatic about a love that endured for a century. This novel is well written and a joy to read."