To Have And To Hold (Murder, Mystery and Mayhem) by Rebecca King 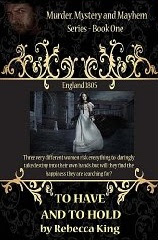 Book one of new the Murder, Mystery and Mayhem series begins the journey of three very special couples living in Regency England, whose courtships are anything but conventional!

How far would you go to secure your own future? Would you fake your own death?

Isobel Davenport is willing to do anything to escape the future her uncle has planned for her. To remain at Gosport Hall would mean being sold into marriage to a ruthless despot as brutal and abusive as her uncle. To flee would lead her to an uncertain future away from everything she has known. She would have no security, no protection, other than her wits. For Isobel, however, there is little choice. With her brother dead, and the only man she has loved and given her body to now wed to another, she has little hope of rescue and must take her future into her own hands. With nothing more than the clothing upon her back and a few meager coins in her purse, she slips into the night.

Rebecca King is currently working on the second of her Murder, Mystery and Mayhem series and can often be found at home, where she looks after her three children and two dogs. Having spent many years as a Librarian, Rebecca has spent many years encouraging others to enjoy her love of books. She now hopes to throw her passion for writing into her books. You can contact Rebecca through her website, Twitter or Facebook.

Email ThisBlogThis!Share to TwitterShare to FacebookShare to Pinterest
Labels: Rebecca King, Regency Romance, Series, To Have and To Hold