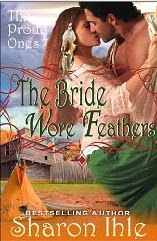 The Proud Ones, Book 1

Dominique DuBois is a golden beauty, and niece to General George Custer, the stalwart enemy of the Indian nations. How could she be fiercely attracted to a shy and handsome Private in her uncle's charge?

But Jacob is more than a lowly private in Custer's Army. On behalf of his adopted people, the Sioux, he's on a dangerous mission to ensure the General's demise. The Sioux warrior he's fought to become mustn't be betrayed by his white-man's heart longing for one last tender kiss, for one more smoldering embrace with Custer's golden niece.

"A stirring love story destined to intrigue Indian romance fans. Ms. Ihle presents a different, often sympathetic portrait of the embittered General, his family, and the reasons that drove the Sioux to rebellion. This is a beautiful story of a forbidden love that survives prejudice and war." ~Kathe Robin, Romantic Times

THE PROUD ONES, in series order
The Bride Wore Feathers
The Half-breed Bride

Sharon Ihle is the bestselling author of more than a dozen historical romances set in the American West. A lifelong Californian, Sharon recently moved from the sunny beaches of San Diego to the frozen plains of North Dakota. Hard to believe, but it's true.