The Billionaire Playboy by Christina Tetreault 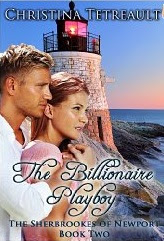 Captain Charlotte “Charlie” O'Brien, a doctor in the United States Navy, returns to her home in North Salem, Massachusetts to visit her family and make an important decision about her future. Mother Nature has other plans when a hurricane strikes, flooding the town and throwing Jake Sherbrooke in Charlie's path. Initially she believes Jake is nothing more than a rich playboy, but quickly, she learns that he is so much more.

The media calls him Prince Charming

Jake Sherbrooke has never been one to follow the path laid out by his parents. That is why he started the Falmouth Foundation, a non-profit disaster relief organization rather than enter politics. When he learns of the destruction in North Salem, he immediately travels there to offer aid and meets Charlie O'Brien. Charlie is unlike any woman he has ever meet and he can not help but be drawn to her.

Soon neither can ignore the incredible chemistry between them. But will his reputation as a billionaire playboy damage their budding romance?

"This book was a great addition to the series. The characters were well developed and believeable. It was fun to watch them grow together as the story went on. And I liked that fact that Charlie was a strong woman independant woman. The plot was well thought out and easy to follow. And even if I had not read the first book, the story would still make sense. Overall, I truly enjoyed this book. Perhaps more than the first and I am looking forward to book 3."

In the Kobo Book Store