The Lady Who Courted Scandal by Isabel Richards 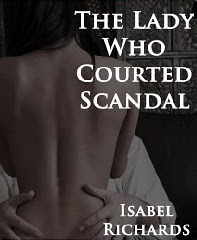 This is the first book of The Brennan Sisters Trilogy

After being seduced and abandoned by the man she thought to marry, Lady Anne Brennan closed off her heart and turned into a controlled and shrewd young woman. Searching for something to ease the numbness she feels, she dallies with the men of London until her father catches her in a compromising position. Banished to the estate where her heart was broken many years before, Anne must return to the place she had hoped to avoid for the rest of her life.

Mr. Jacob Grange has been leading a lonely and unfulfilling life as a solicitor in York. By throwing himself into his work he tries to keep his mind from obsessing over the woman he loves who used him and threw him over for a man of her own circle. Returning to visit his family at the estate where his father works, the unthinkable occurs when their paths cross unexpectedly.

Anne and Jacob must face the past and uncover the truth behind their separation. But can they escape unscathed when scandal threatens to engulf the entire Brennan family?

Isabel Richards is a young American living in Scandinavia. An economic advisor by day, by night she loves losing herself in the world of historical romance novels. You can reach Isabel via her blog: http://isabelrichards.blogspot.com