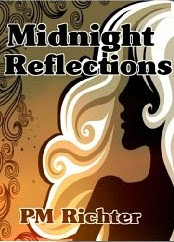 Julia's midnight reflections actually happened at four in the morning.  She was far from home, lonely, watching a handsome man sleeping in her bed at the Beverly Hills Hotel.  Robin, the handsome sleeping man had put himself in terrible danger so she could solve a mystery.  Now she was feeling guilty as hell.

﻿Robin finds himself obsessed by Julia, knowing something besides her attractiveness enchanted him; an illusive mixture of sweetness and intelligence that beckons.  He's playing a role, hiding his true identity, trying to win her heart.

Julia is playing a dangerous role herself, working for a man she believes is a murderer.  She also suspects that Robin is much more than the simple man he proclaims himself to be.  Can she trust him?

Together they uncover information so inflammatory they are forced to flee a
dangerous and angry politician.  He rules a profitable drug army.  People who will do anything to get into his good graces. Even murder...

"The plot of this full length novel was unique, engaging and wonderfully executed with romance, action and suspense. It was a captivating fast paced story that had me glued to my Kindle until the end."

"I just couldn't put it down because the pace was fast and it was so much fun."