Between HeVan and Hell by Lucy Kelly 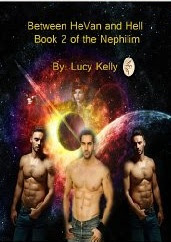 Grace Perez, dedicated Chicago Police detective, is working undercover at a Casino named Hell. It’s owned by the largest organized crime family in the city, the Kadyrovs. It’s hard for her to keep her mind on the job when just three days ago her younger sister Addie told her that she had proof they were descended from aliens called the Nephilim from the planet HeVan. Grace is not getting a lot of rest due to the passionate nightly dreams that started after she spoke to her sister.

Now she’s in danger, Anton Kadyrov has fixed his sights on her as his next conquest to seduce and kill. Vasily Kadyrov is digging for proof she’s a cop. And the three hot Nephilim are not only invading her dreams, now they want to invade her assignment.

When, Jalen, Justyn, and Jett believe their mate is in danger, they’ll do whatever it takes to keep her safe. Even if it means going head to head against the mob.

"The plot is a unique twist where some women on Earth find they are more than they seem and the men from HeVan are very hot to handle. With numerous twists and turns, the ending makes you impatient for a little HeVan of your own."

For Nook, Kobo, iBooks, and more at Smashwords