Looking For Jamie by Angela Rigley 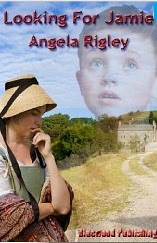 Set in the late nineteenth century, this is the story of a young boy who is found bedraggled and starving, having lost his memory. All he knows is his name, Jamie. He is taken in by the household of The Grange on the Brightmoor Estate who soon come to love him as one of their own, especially the master David Dalton whose own son had been killed in an accident two years before. Some months later, Tillie Raven is released from prison where she had been sent for stealing a loaf after holing up in a barn to escape a fire. Now she has to find her son, she does not even know if he is still alive, but where should she look first?

"Angela Rigley does a great job of building believable characters who hold the interest of readers. They remain true to their character throughout the story. I was drawn into the story almost immediately and had no trouble picking it up again after a short break. I fell in love with Jamie as did the 'Master' who discovers Cupid in the package of this small boy. A highly recommended read..."

For Nook, Sony, and more at Smashwords