The Beltane Choice by Nancy Jardine 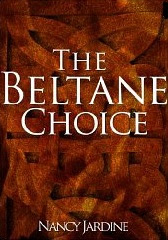 Banished from the nemeton, becoming a priestess is no longer the future for Nara, a princess of the Selgovae tribe. Now charged with choosing a suitable mate before Beltane, her plan is thwarted by Lorcan, an enemy Brigante prince, who captures her and takes her to his hill fort. Despite their tribes fighting each other, Nara feels drawn to her captor, but time runs out for her secret quest.

As armies of the Roman Empire march relentlessly northwards, Lorcan intends to use Nara as a marriage bargain, knowing all Celtic tribes must unite to be strong enough to repel imminent Roman attack. Nara’s father, Callan, agrees to a marriage alliance between Selgovae and Brigante, but has impossible stipulations. Lorcan is torn between loyalty to his tribe and growing love for Nara.

When danger and death arrive in the form of the mighty Roman forces, will Nara be able to choose her Beltane lover?

"Nancy Jardine has woven a tale as complex as the Celtic knot that graces the book's cover."

"Impeccable prose, suitably matched to the times of turbulent Roman Britain, marches the story towards a fitting political and personal conclusion - but not without some satisfying twists."

In the iBook Store

For Nook, Kobo, Sony and more at Smashwords