It's Not About Him by Michelle Sutton

A night of partying...
An unplanned pregnancy...
Why is the best solution always the hardest? 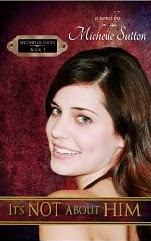 From the Second Glances Series:

After passing out at Jeff's party, Susie becomes pregnant. Because she has no idea who the father is, she considers having an abortion. But adoption seems the better choice. Everyone has a strong opinion about she should do, but it's her decision to make. Hers alone. Following through ends up being more heart-wrenching than she'd imagined, but she's determined to do the right thing for her baby. She's not ready to be a mother.

Guilt-ridden Jeff offers to marry Susie so she won't have to give up her baby like his birth mother had done with him. But Susie refuses, insisting he should marry someone he loves and not marry to rescue her from her painful situation. After Susie places her baby with a couple she trusts, she expects to be abandoned, but Jeff sticks with her despite her attempts to discourage him. They grow close as Jeff tries to comfort Susie while she grieves the separation. Will Jeff see the good in Susie's decision and come to understand that what she did is not about him, but what is best for her child?

This is a highly-rated novel! 25 reviews with a 4.6-star average!

"What is great about what Michelle Sutton is that she isn't afraid to write about what is real. This stuff is really going on in our YA today and she writes about it honestly and right in your face!"

"...a gripping story about two people struggling to make right choices despite their past mistakes."