Catherine and the Captain by Margaret Lake 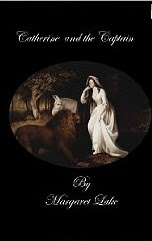 Look what we found! A Kindle Historical Romance Novel!

Catherine Neville was a sassy little girl full of spirit and bravado until the day a stranger invaded her home and her courage failed. Her spirit bruised and her confidence shaken, she fled from her nightmares only to be dominated by her demanding cousin, Anne Neville.

A dozen years passed. Catherine had made a place for herself within the confines of Middleham castle. She was grateful for the security offered by Anne and never realized that she was treated as little more than an unpaid servant. Now her precious world is threatened, by the same man from whom she had run so many years ago.

Kyle Fallon was a soldier in the pay of Baron Layne when he was sent to kidnap Ariana Devoe. Instead of Ariana, he found a frightened young girl hiding behind her mother. The fear in the little girl's huge doe-like eyes sickened him and he vowed never to prey on the weak and helpless again. He spent the intervening years making up for his misdeeds.

Now in the King's service, he is sent to inform the Duke of Gloucester of his brother's death. There he meets Catherine again, a lost soul if he ever saw one. He is determined to free her from Anne's clutches, but Catherine's tender heart can't believe that her cousin would use her.

Catherine knows who Kyle is, but he doesn't recognize her. Her obvious fear of him is a puzzle he must solve before he can win her away from the web of intrigue that surrounds her. As she tries to run from him, the handsome captain leaves her nowhere to hide.
Posted by Donna Fasano at 5:00 PM