The Daughters of Luke McCall by Linda Sandifer 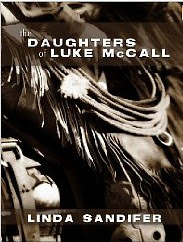 Look what we found! A Kindle Romance for under $5.

In this light-hearted, fast-paced western adventure, Luke McCall and his four daughters--Hank, Andy, Brett, and Delaney--are a family of mustangers in 1863 California. Accused of murder and horse stealing, they become fugitives from the law. Fleeing their ranch, they must outride and outsmart Eli Stark, the crooked marshal who framed them for the crimes. They lead Stark and his bounty hunters on a wild chase through California and Nevada. Along the way, Delaney, the youngest sister, falls in love with a mysterious stranger who befriends them, never suspecting that he is one of Stark's men.

The McCalls aren't known for double-crossing, lying, or going back on their word, but they're not above getting even. As Stark and his cohorts soon find out, they're a hard bunch to keep a dally on.

"For those who like the real West, who are fans of Linda, or those who are just plain looking for a grand read." Affaire de Coeur Magazine
Posted by Donna Fasano at 5:00 PM