Xarrok: Birth of an Empire by Catrina Taylor 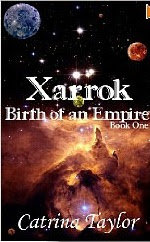 Look what we found! A Kindle SciFi Romance Novel for under $2.


Kala, a once timid Xenonian slave girl, possesses a unique psionic signature exploited by the military to create a powerful weapon of war. Climbing to the rank of Fleet Commander, the compassionate Kala stirs controversy when she pushes for peace in the chaos of the great war.

A skilled but reckless soldier from the opposing Dentonian fleet, Yatrell struggles to hone his unique talents. The skills and abilities that help him become the formidable leader are the same that may be the undoing of his entire planet.

Brax left his clan when his psionic ability surfaced. A gentle giant, he has become an exceptional fighter whose only weakness is his desperation for acceptance.

When the three are reunited, they become a dynamic force…and the key to peace.
Posted by Donna Fasano at 7:00 AM