Secrets of Midnight by Miriam Minger 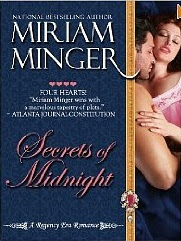 If Lord Donovan Trent had his way, he would spend his days carelessly wooing the women of London society. Instead, he found himself banished to the English countryside of Cornwall, forced by the decrees of his father’s will to run his family’s tin mines and find a country bride. The last thing the handsome lord needed was a local lass sticking her nose into his affairs, but that seemed to be exactly what Corisande Easton had in mind.

Corie had spent her whole life struggling to help those less fortunate than herself. When she heard that Lord Donovan had arrived in Cornwall, she seized the opportunity to confront him about his family’s mistreatment of the overworked tinners. Donovan and Corie soon found their tempers flaring while fighting to deny their fiery passions—until a secret business arrangement forced them into each other’s arms.
Posted by Donna Fasano at 5:00 PM