Kissed by Darkness by Shea MacLeod 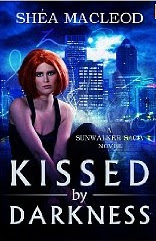 Look what we found! A Kindle Romance Novel for under $3.

Danger is always on the menu for Morgan Bailey, a sexy and street-smart bounty hunter, who prowls the dark underworld of Portland, Oregon hunting creatures of the night. Morgan’s never met a vampire she couldn’t dust or a demon she couldn't kill until she's hired to destroy a new kind of mystical threat: the Sunwalker.

A powerful immortal once believed myth, the Sunwalker carries with him an ancient secret which, if left unchecked, will destroy Morgan’s world. Pursued by a passionate Templar Knight and the target of the local vampire clans, an ancient power is awakened within her, unlike anything she’s ever known. Morgan must uncover the truth behind her mission and about herself, before the Darkness lurking inside swallows her whole.
Posted by Donna Fasano at 7:00 AM