She Belongs To Me by Carmen DeSousa 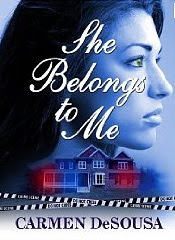 Look what we found! A Kindle Romantic Suspense for under $3!

When wealthy construction company owner and Charlotte detective, Jordan Monroe, meets Jaynee for the first time he is awestruck and determines to make her his wife. Jaynee, however, has a history she cannot easily overcome and is fearful to submit to love. Jordan succeeds in making her his wife, but five years into their marriage he realizes she is keeping secrets. Before he can decipher her duplicity, he discovers her unconscious in their home from a gunshot wound only hours after giving her an ultimatum concerning their relationship.

With Jaynee’s life hanging in the balance, the mystery of her past drives Jordan to investigate. But what appears to be an attempted suicide turns out to be something far darker. Is someone from her past stalking her? Or worse, is someone close to Jordan trying to kill them both? As Jordan edges closer to the truth, it may be deadlier than he could ever have imagined.
Posted by Donna Fasano at 7:00 AM

Email ThisBlogThis!Share to TwitterShare to FacebookShare to Pinterest
Labels: Carmen DeSousa, Kindle, Romantic Suspense, She Belongs to Me