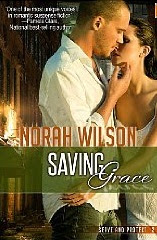 Look what we found! A Kindle Romance novel for under $4!

After wrecking her car and waking in hospital with amnesia, fledgling reporter Grace Morgan has no idea why she’d been in the process of leaving the husband she loves so dearly. Her husband, Police Detective Ray (Razor) Morgan tells her she was leaving him for another man, but that just can’t be so. Can it? She’s determined to remember, even if it kills her. And it just might. When bullets start to fly, Ray is forced to take the wife he believes faithless on the lam until they can figure out who is trying to kill them.
Norah Wilson hits another one out of the park with book two in the Serve and Protect series. ~The Romance Reviews
...a perfect mix of romance and suspense. ~LoveRomancePassion
[Wilson] combines characters that just jump off the pages, a winning story line and  fast action to make this a real page turner. ~Sugarbeat's Books