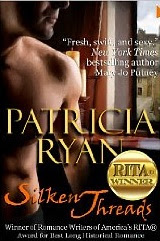 Look what we found! A Kindle Medieval Romance Novel for under $1! Silken Threads by Patricia Ryan

Prequel to The Sun and the Moon. In this RITA-winning medieval romance inspired by Hitchcock’s Rear Window, a soldier heals from a broken leg in the London home of a young widow who steals his heart—but his future rests on an arranged marriage to his lord’s daughter. Originally published by New American Library, a division of Penguin Putnam, Inc.