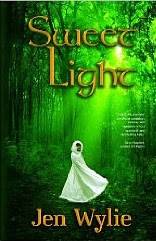 Look what we found! A Kindle Romance Novel for under $3.

When fate conspires against you and gives you three loves to choose from, what do you do? What if you make the wrong choice?

Shara is a Healer, raised and trained from childhood until her unique gift manifests itself. When she gains the rank Journeyman she is hired to serve as the court healer for the barbaric kingdom of Glendor.

Untrained for war, she is thrust unmercifully into its bloody arms when the kingdom is invaded. Ordered by her king to the front lines to tend the wounded, she is forced to flee when their camp is attacked. Happening upon a wounded soldier in the forest, every mile back to the capital is a struggle, and breaking the Healer's code, she falls in love with her charge.

If Shara thought that to be the least of her troubles, the appearance of a fierce warrior captain who appoints himself her protector, teaches her differently. Trouble comes in threes at the appearance of a former love and fellow healer. Faced with decisions of the heart and the sudden manifestation of her gift, there is little room for anything else to go wrong. Or at least that's what Shara thought.
Posted by Donna Fasano at 7:00 AM