Once Upon a Dream by Jennifer Archer 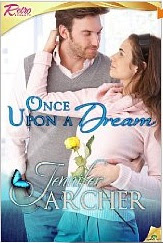 
Can the answer to her curse lie in the dreams of the past?

When Professor Alex Simon moves to Canyon, Texas from England, he welcomes the opportunity to change his locale. Not only would he be aiding his recently widowed sister, but he would have a chance to forget a failed relationship.

Robin Wise is less than impressed by her new neighbor-- and his little devil-cat. The feline taunts her dog, and its stuffy owner has the gall to blame her pup for the squabbles. But at a second glance, Alex isn't quite as nerdy as he seems. As a matter of fact, when he isn't insulting her dog, he can be quite charming.

But Robin has her own problems. An inherited curse looms over her impending thirtieth birthday, and until Robin can overcome the hex, she can't indulge in any fantasy she might have regarding the more-perfect-by-the-minute professor. No matter how she wishes she had the courage to act on the awakened desire in her heart.

This book is a Retro Romance reprint and was originally published by Dorchester Love Spell in January 2001.
Posted by Donna Fasano at 5:00 PM

Email ThisBlogThis!Share to TwitterShare to FacebookShare to Pinterest
Labels: cheap kindle books, Jennifer Archer, Kindle, Once Upon a Dream, Romance