Sands of Passion by Georgia Kakalopoulou

~From the author of Gods and Guardians~ 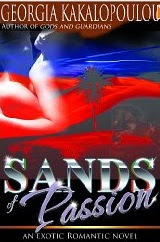 She turned and looked at him with huge eyes. He was already standing across the targets and now he was holding a big shinny bow in his hand. He was dressed in black and on his head there was a turban of the same color blowing in the wind making him look like a creature of another world. His slender figure was swallowing everything around him. Like he was the center of the whole universe. With a dark charm! A dangerous one!

She swallowed with embarrassment. She wasn't certain anymore about the way with which she had been treated the young man. Maybe she was less scared of him compared to the fear she felt for that man across her. He made a movement towards the young man giving him the opportunity to go first. The young man after taking a bow, assumed his position and took his shot. It was a very good one. Slightly outside the center. The prince shook his head in approval. He took a bow again and stepped aside for his master's turn. A tremble took over her and she bit off her lips. He stretched his arrow and ultimate quietness prevailed in the entire camp. Everyone seemed like they were holding their breaths. Just like her. The fires creaked and the soft breeze went by their faces caressing them. Hakim pulled his fingers, the arrow whistled tearing apart the air with force. She closed her eyes. She knew! The arrow's target was her. And it has found it. The camp was seized by shouts of joy and she opened her eyes scared. He was looking her. His gray look upon her was enigmatic. She swallowed to wet her dry throat. She was in trouble! Deep trouble!

"The book is very romantic and quite passionate. I started reading it and I could not stop. Definitely a good buy."

"A light, short read, a tender story to remind you that dreams may come true, for the hopeless romantic people."