A Taste of Seduction by Mary Campisi 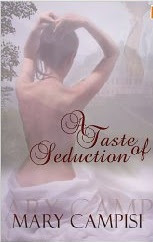 In the UK Kindle Store
Also in the Nook Book Store

A young woman of noble blood, raised as a peasant girl...

An orphaned stable boy, now grown and the surrogate son of a powerful earl – the same earl who just so happens to be the young woman’s father...

Meriel and Anthony have nothing in common--she runs barefoot and talks to animals, he won’t loosen his cravat unless the bedroom door is firmly closed. Meriel believes in love, hope, and happily ever after. Anthony believes in keeping a safe distance from anything resembling an emotion. They have nothing in common but an undeniable, burning desire for one another they can’t ignore or understand, and an ailing "father" who will do anything to see them together. Unfortunately, there are others, cunning and manipulative, working behind the scenes. Others who will stop at nothing, willing even to kill, to keep them apart.


"With enough scandal and secret plots to rival a daytime TV special and a pair of leading characters that are among the best I've read in a while, this is definitely a story not to be missed!"  ~Bridget, The Romance Reviews

A Taste of Seduction was nominated for Best Historical Romance of 2011 by The Romance Reviews!


Bringing you the best romance books available!
Posted by Donna Fasano at 5:00 PM