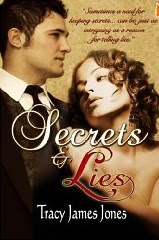 “Secrets & Lies,” is an in-depth emotional journey into the private lives of four central characters that unfolds as a provocative multi-cultural modern romance with a twist.

Secrets, as they are, rarely devastate the national population as a whole. They are more often limited to the individual going on about their lives. That is what this story is about, a group of not-so-ordinary people, all from very different backgrounds, whose secrets and lies leaves a trail of honest deception waiting to upset the rituals of their daily existence.
* * *
Kennedy Jordan is a handsome young man with a secret past and a challenging future that keeps him in the balance between having what he wants versus what others expect of him.

Camilla Vargas is a beautiful ambitious young woman with big dreams of success that she has planned to obtain by any means possible, and vows to not let anything keep her from it.

Ulanda Jefferson is a hip outspoken fashionista with a fiery attitude. Armored with sharp-wit and an uncensored tongue, she is more than just a force to be reckoned with.

Bren Searcy is a grown-up lost in transition, (literally from male to female). There is almost nothing she wouldn’t bear to hang onto the happiness she has finally found.
* * *
In the end, for everyone involved, even the elements of true confessions gets lost in translation as the explicit details of who they are brings the group together in a surprising, yet necessary finale that could change the course of their lives forever…

"Richly intricate plots, amazing storytelling and complete surprise is what awaits you in this book. I dare not give away too much detail, this story is far too good to destroy with spoilers, but if you don't enjoy Kenny, Camilla, Bren, and Ulanda as much as I did, I'll be surprised!"
Posted by Donna Fasano at 5:00 PM