Heiress Without A Cause (Muses of Mayfair) by Sara Ramsey 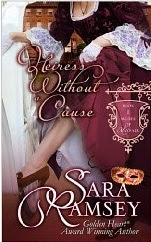 We found a Kindle Regency Romance Novel for $0.99!

One title to change his life...

A disgraced son with a dark reputation, William "Ferguson" Avenel is content to live in exile - until his father dies in the scandal of the Season. With rumors of insanity swirling around them, his sisters desperately need a chaperone. Ferguson thinks he's found the most proper woman in England - and he won't ruin her, even if he secretly desires the passionate woman trapped beneath a spinster's cap.

One chance to break the rules...

Lady Madeleine Vaillant can't face her blighted future without making one glorious memory for herself. In disguise, on a London stage, she finds all the adoration she never felt from the ton. But when she's nearly recognized, she will do anything to hide her identity - even setting up her actress persona as Ferguson's mistress. She'll take the pleasure he offers, but Madeleine won't lose her heart in the bargain.

One season to fall in love...

Every stolen kiss could lead to discovery, and Ferguson's old enemies are determined to ruin them both. But as their dangerous passion ignites their hearts and threatens their futures, how can an heiress who dreams of freedom deny the duke who demands her love?

"Book one of the Muses of Mayfair begins a promising new series with artistic women who must perform their vocations as males. Mad and Ferguson mature as a couple and help those around them through their problems." - Donna M. Brown, 4 star review RT Book Reviews

"...A feisty independent heroine tames an arrogantly handsome hero in this Regency romance filled with witty banter and dicey situations. Ramsey snares her readers from the first as she shares the secret thoughts and longings of her characters through sensuous imagery and creative dialogue..." -Donna Zapf, 4.5 star review Singletitles.com

Email ThisBlogThis!Share to TwitterShare to FacebookShare to Pinterest
Labels: Heiress Without a Cause, Regency Romance, Sara Ramsey