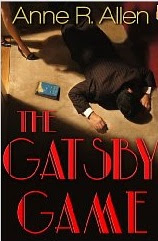 "In The Gatsby Game, Anne R. Allen blends a perfect combination of witty, sharp narration, a plot that won't let the reader go, and nuanced characters that evoke our caring. A genre novel that artfully transcends its genre."

Catherine Ryan Hyde, best-selling author of "Pay It Forward" and "Love In The Present Tense."

"Dark, twisted chick lit with a side of laughter. Plus celebrities, murder and and a smart-mouth nanny." Ruth Harris. NYT best-selling author of "Modern Women", "Decades" and "Husbands & Lovers".

About The Gatsby Game:

This novel offers a possible solution to a real unsolved Hollywood mystery—the death in 1973 of David Whiting during the filming of the Burt Reynolds’ movie, "The Man Who Loved Cat Dancing". Whiting was found dead in the motel room of the actress Sarah Miles. It destroyed Sarah Miles' career and her marriage.

When Nicky Conway meets Fitzgerald-quoting Alistair at a Princeton mixer in 1969, she falls for his retro, Jazz-Age charm. But she discovers he’s a con man obsessed with his own “Daisy”—British actress Delia Kent. After Alistair manipulates Nicky into nannying for Delia’s daughter on the set of aHollywood film, Delia finds Alistair dead in her motel room. Local police can’t decide if it’s accident, suicide—or murder, in which case, Nicky is the prime suspect.