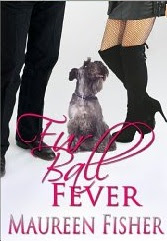 “ONE FOR THE MONEY meets BEST IN SHOW ... Fans of Stephanie Plum and dog lovers should love this one ...”

FUR BALL FEVER is a romantic crime mystery spiked with attitude (most of it warped) and enough steamy sex to drive those who dare read it racing for a cold shower. After a lifetime of impetuous mistakes, pet spa owner Grace Donnelly outdoes herself when she loses her elderly client’s prize pooch—a shoo-in to win the annual Jersey Shore Fur Ball. Money, careers, and lives are in jeopardy. Too bad her helpers consist of an aging hippie aunt, a renegade schnauzer, and a drag queen. Worst of all, the only man truly qualified to help is her former flame, the hunkiest bodyguard north of the Mason-Dixon Line.
Security specialist Nick Jackson faces his worst nightmare when Grace’s amateur investigation nearly blows his undercover operation. Unless he nails the con-artist who scammed local seniors and whacked a witness, his homicidal granddaddy will take justice into his own liver-spotted hands. To salvage his case, his sanity, and his ex-lover’s velvety skin, Nick joins forces with the sassy crusader who rubs him the wrong way—and so many right ways too.
Action bounces between a beach harboring washed-up corpses, a fancy yacht no honest preacher could possibly afford, and the bawdiest nightclub in Atlantic City. Hazards multiply like bunnies until exploding into romance, murder, and mayhem culminating in a Fur Ball extravaganza the locals will never forget.

"Grace and Nick are really cute together (he's a hot southern guy--yowsa!), and the mystery sucked me in. The supporting characters, especially the pot-smoking aunt, made me laugh."