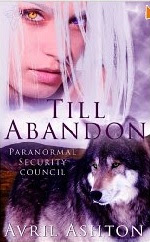 Book one in the Paranormal Security Council Series

All the power and killer instinct she possess can’t protect her from the claiming of one determined wolf.

They call her ‘The woman in white,’ whisper ‘Death-Bringer’ with their last breath, but no one knows exactly what she is. Not even Voltaire herself. The deadly magic within her is a living thing, able to crush anyone and everything with a blink. Abandoning the blood-soaked world she’s used to, Voltaire seeks out the one constant in her tired life-the green-eyed wolf in her dreams. She’s ignored the wolf’s call for years, afraid to surrender, but danger haunts her mate. He needs her.

Wolf-shifter Blake Montez is in the middle of a war, battling the usurpers intent on taking over his territory. Unfamiliar magic hums in the air, unnoticed-it seems-by everyone but him. He finds the source already under his nose, in his home. The delicate woman in white knows things no one should know, and the heat simmering between them is unlike anything he’s ever felt. His wolf recognizes her as his mate, though Blake remains unsure he can trust her.

Voltaire sets out to prove herself with time running out. Enemies are on the prowl, some foreseen, others remaining cloaked in shadow. She and Blake team up, fighting side by side, but in the end Voltaire might be the biggest threat to their love.


"This book kept my attention from the first page till the last. Entrancing and sexy characters who you fall in love with immediately. Action packed from page one." ~Romancing The Book

"It's one I'll reread." ~Rebecca on Amazon