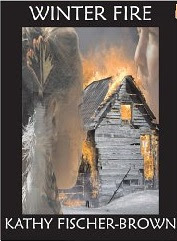 When Ethan Caine pulled the unconscious woman from the half-frozen creek, he had no idea that his world was about to explode. Dressed in quilled doeskin of Iroquois design, she stirred up dark secrets from his past. At the same time, she was everything he desired. But she was more Indian than white, and on the run for murder. He needed to know the truth. He needed to find it within himself to trust her.

Banished by the Seneca Indians who had adopted and raised her, ostracized by the whites in the settlement, Zara Grey wanted only to be accepted. “Ethancaine” treated her with kindness and concern. It was easy to trust him. But her Indian ways disturbed him, and her heart she would always be Seneca.

"From the beginning to the end, "Winter Fire" grabs the reader and doesn't let go."