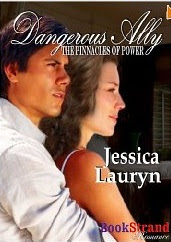 From the Pinnacles of Power series, a BookStrand Romantic Suspense

When Reporter Lilah Benson takes a job in the home of diamond smuggling kingpin Lucas Ramone, she believes she has a chance to write the story of a lifetime. But when she meets the man who was supposed to be her nemesis, Lilah is tempted by a passion far stronger than the desire to see her name in print...There was no doubt in Lucas's mind that eliminating his father's new executive assistant--namely, the bastard he's hired to help steal Project Gemstone--would be effortless. But with eyes like green jewels and a body made for a man’s hands, Lilah Benson isn't exactly the adversary he was expecting to face...Though Lilah may be the one person capable of bringing him to his knees, Lucas will stop at nothing to keep his empire secure. He will have it all: His Fortune, His Legacy, and Lilah Benson in his bed...

"I found myself swept away by the characters and their struggles. Nothing comes easy for the characters in Dangerous Ally. They are all tortured in their own way. I found myself rooting for the Lucas and Lilah. Hoping that everything would work out for the unlikely couple. I would recommend this story to anyone that likes a good mystery. You never see the twist and turns coming." ~Storm Goddess Book Reviews & More

"The suspense begins immediately, and the chemistry between Lilah and Lucas is scorching. Add in manipulative relatives, sexy seductive staff members, a little stubbornness and a will to fight for what's yours, and you've got yourself this intriguing read that will keep you on the edge of your seat from beginning to end. I loved it!"