His Brother's Baby by Blanche Marriott 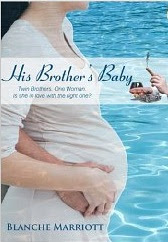 David Rutland has spent a lifetime covering for his errant twin brother and making things right. No more. Time for the irresponsible womanizer to grow up and face the music. But David isn't prepared for his world to be rocked when he meets the beautiful redhead who mistakes him for his missing brother. David doesn't know what's worse, deceiving his brother or deceiving this woman he's waited his entire life to find.

Gabriella Santori knows the meaning of a rock and a hard place. Lured by the big tipping Damien Rutland to save cigar bands for him at the cigar lounge where she works, she eventually realizes he's up to no good. She decides she's had enough and arranges a meeting to tell him, but she's taken back by the difference in him. He's not the creepy, macho, unnerving customer from the cigar lounge and before she knows it, she's smitten.

When Gabriella later discovers she's pregnant and learns that Damien is missing, she enlists David's help out of desperation. As the family waits for news of Damien's whereabouts, Gabriella can't help falling in love with the wrong brother...or is it? Must David forego the love of his life because of his twin's irresponsibility? And will they ever find his missing brother?

"Blanche Marriott has the golden touch when it comes to storytelling. This is not same old/same old, and what a refreshing change. I'll read anything she writes."

"It's well written, timely, a bit of a mystery, and a wonderful addition to any library."

"I thoroughly enjoyed this romance novel. The characters were richly developed. You could relate to the main characters - Gabriella and David - and feel in tune with their internal conflicts. The story line had a surprising and unexpected twist. This is one of those books where you can't put down and find yourself stealing moments away from daily responsibilities in order to continue reading!"


Find it in the US Kindle Store