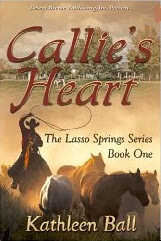 Callie Daniels' mother has one dying wish. She wants neighboring rancher, Garrett O'Neill, to marry her seventeen year old daughter. It's not supposed to be a conventional marriage.Garrett O'Neill would keep Callie's ranch safe and Callie would go away to college.

Four years later, Callie comes home with stars in her eyes and happily ever after in her heart. She plans to make their marriage real until finds the new housekeeper, Sylvie in Garrett's arms.

Heartbroken, Callie takes off to her own house, which they closed up four years ago. She stays there with Old Henry, a longtime friend and ranch hand, until her new horse injures her. Garrett forces Callie to move back in to his house.

Callie finally gets her heart's desire. Alone in a line shack, they make sweet love for the first time. Unfortunately the love light is gone from Garret's eyes the next morning.

CALLIE'S HEART was filled with mystery/ suspense that it captivated me from the beginning. The story was well written with just the right amount of romance. I can't wait until book 2 comes out in September and I am really hoping it has to do with the one ranch hand that was so thoughtful with Callie. I want to see him happy like Callie and Garret.