Time Heals Everything by Linda Swain 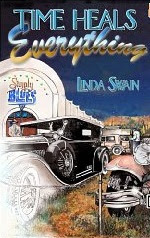 While Hitler marched through Europe, Big Band Music and Jazz in America was in full swing. Beautiful Katherine Collins, a girl from nowhere, suddenly had it all. Her promising career as an up-and-coming cabaret singer in a swinging 1930s hot spot known as Simply Blues lands her in the middle of a tug of war the likes of which she'd never dreamed possible. On one side stands the man who had opened the door to her career but who refuses to allow himself any further claim to her heart, and on the other stands a man who will do anything to claim Katherine as his own. Set in the tumultuous times leading up to World War Two, both men will shape her destiny in unchangeable ways, but whose heart will Katherine choose, and whose will she break forever?


"This was a very touching story and beautifully written."

"I dove into the intrigue and setting immediately. The 1930's smoldered and the characters kept it lively...suspenseful and interesting. Dark and a bit twisted in a romantic slant."

"I will recommend this to all the women I know. A really good story."