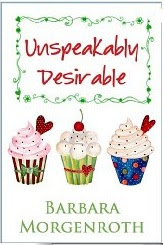 French pastry was the only thing Bel Miller found unspeakably desirable until she met Asher Lau. Unfortunately, she wasn't the only one who wanted him.

He’s a lawyer with a television show and a girlfriend who enjoys wrapping men up in duct tape and trussing them like a turkey. Once she catered his Thanksgiving feast, Bel figured she would never hear from Ash again. Well...by Christmas, she was sure Asher Lau and his heiress gal pal with the predilection for plumbing supplies would be out of her life. When the photos of the private sex romp go public, everyone is embarrassed but the girlfriend, now ex-girlfriend. She insists on marrying Ash as a cover story. “It was a Halloween costume!”
And then there’s that fan no one counted on. When something is unspeakably desirable, people can get really desperate.

Temporary price reduction to celebrate the end of summer--such a deal!

"Great read. The relationship between Ash and Bel is really sweet. Though circumstances prevent them from connecting, the longing remains."

"I loved this book. Bel is a hoot: sarcastic, plain-spoken, completely at ease with herself. She's definitely someone I'd want as a friend."

In the Kobo Book Store